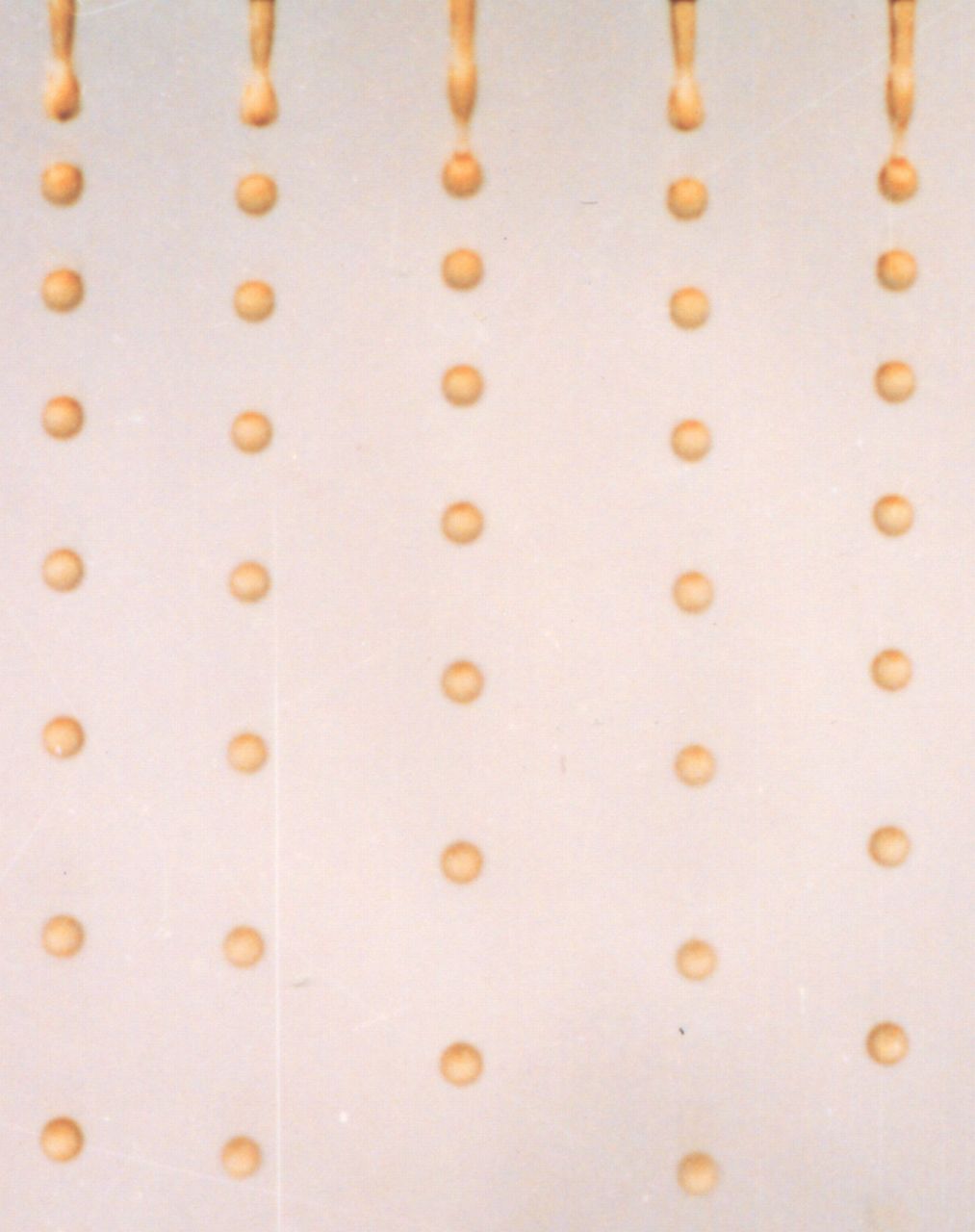 The patented BRACE microsphere technology is of great help if one wants to produce spheric granules from varying materials. The BRACE technology is applicable to nearly any material that can be liquefied and solidified again afterwards.

The liquefaction of the starting material can be achieved by different means: the dissolving of the raw material in nearly any solvent choosen (this process is called a binder process because a temporary binder is often used), the melting of the raw material in a melting furnace (melting process), or the generation of a gel from a sol (SOL-GEL process). For the production of microcapsules, a combination of these processes is often used. 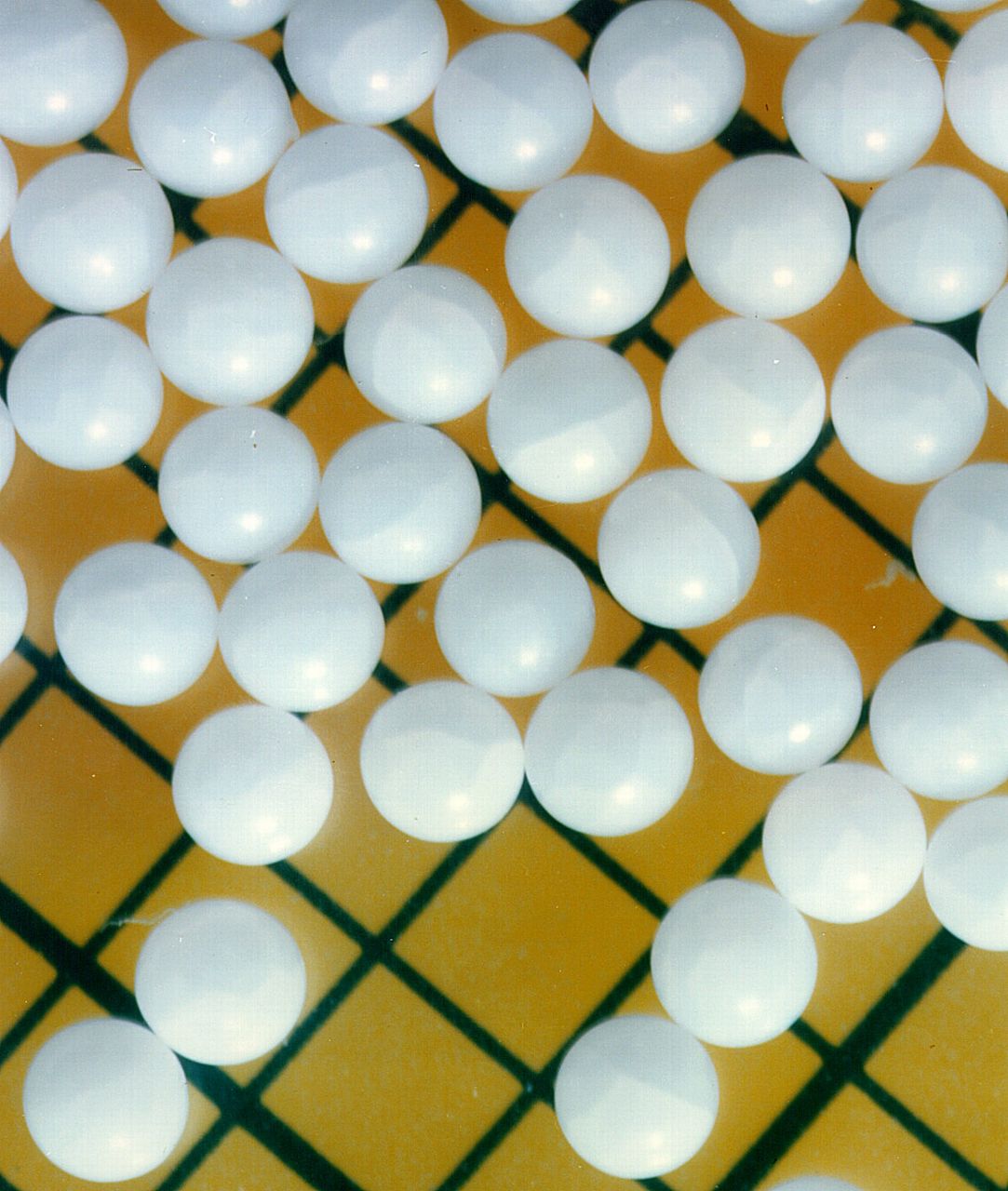 But one has to keep in mind that the smallest diameter of the microsphere is correlated with the viscosity of the molten starting material: the higher the viscosity, the larger the sphere diameter. The temperature for the production of microspheres by melting processes is limited only by the starting material itself; so it is even possible to process pure silicium at 1450° C. 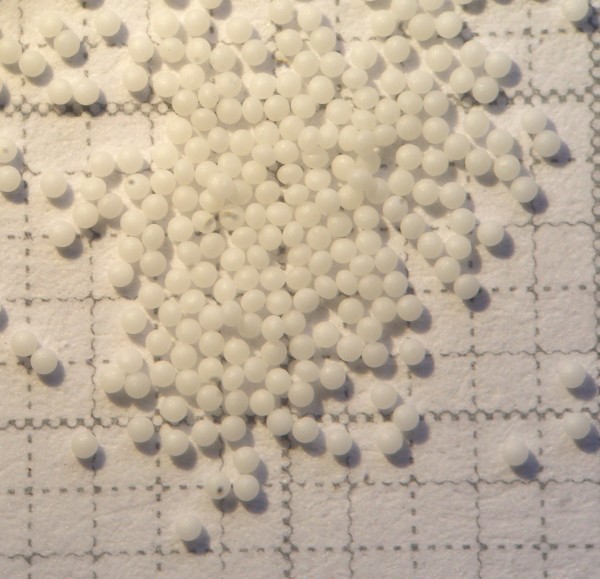 One of the commonly used processes for the production of spheric granules is based on the application of a (temporary) binder which agglutinates the particles of the starting material, which often is an organic or inorganic powder.

A binder is e.g. used for the production of granules from inorganic oxides like ZrO2, HfO2, SiO2, Al2O3 etc. The binding agent is usually an organic substance like alginate, gelatine, agar-agar, cellulose or an inorganic sol like SiO2.

The organic or inorganic binders are removed from the resulting microspheres by a slag process with temperatures of about 300° C. It is possible to produce microspheres with hardly any impurities with these simple and versatile processes. According to the starting material a lot of different microspheres can be produced: grinding beads with a very high density, catalysts and catalyst supporters, additives for food or cosmetics and so on.

Binder processes can also be used for the encapsulation of mammalian cells for medical purposes and for the encapsulation of aromes and perfumes for food, cosmetics and other consumer goods. BRACE is offering some of the frequently requested products like ceramic microspheres, catalyst supporters and microspheres for cosmetic applications as standard products. Beyond that, BRACE is also developing new recipes in cooperation with its customers for the production of microspheres out of the ordinary.

If a metal ion has an oxide with a low solubility this oxide can be precipitated from a pre-neutralized solution by the addition of a base. In this reaction, the metal ion hydroxide is formed which passes over into the oxide. In the meantime, the viscosity of the soultion increases. Therefore, this process is called the formation of a gel from a sol.
The SOL-GEL process is used for the production of extraordinarily pure oxidic microspheres, e.g. for the production of Al2O3 microspheres for petrochemistry.

These microspheres are precipitated from the solution instead of adding a binder to it. Therefore, it is possible to produce extraordinarily pure microspheres with a very large surface.

The SOL-GEL process can also be applied to the production of catalysts, catalyst supporters and nuclear fuels which must not be contaminated.

Each process of the previously described can be applied to the production of microcapsules with the BRACE double-nozzle systems.

Microcapsules are produced with special nozzles that produce two concentric droplets. The material for the inner core can be chosen independently from the shell material unless it weakens the stability of the shell.

The shell material, on the other hand, can be chosen to be a solution, a molten mass or a sol or a combination of these.

The hardening of the spheres is done as described for microspheres. The result is a capsule with a solid shell and a solid (if a molten mass is used for the inner core) or a liquid core.

Materials that are encapsulated are aromes, antiallergic substances or phase change materials. Such capsules are needed e.g. by the food, the textile and the building industry.

If binders as hydrocolloids are used for the production of microcapsules, drying can be helpful. Because commonly used driers like heating chambers, fluidized bed driers or microwave driers are not suitable for this purpose, BRACE developed a special drum drier.